Christophe |
Comments Off on About bismuth 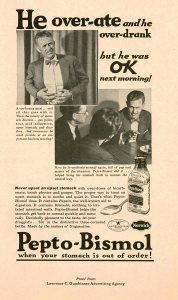 If you’re like most people, Bismuth is probably a word you’ve heard before, but most people don’t actually know much about what it is. Bismuth as it turns out is a white, crystalline metal which is brittle and has a slight pink. It has a very wide range of uses in industry including it the cosmetics industry, in metal alloys, in fire extinguishers and in ammunition. However, most people will probably be more familiar with it as the main ingredient of the medicine Pepto-Bismol – a medicine mainly used to treat heartburn, acid reflux, indigestion, diarrhoea and nausea. Bismuth is element 83 on the periodic table of elements and is what’s known as a post-transition metal (the name ‘post-transition metal’ refers to their position after the ‘transition metals’ in the periodic table).

Something most of us will know even less about it where on earth do we get this metal from? Bismuth is found in the Earth’s crust – apparently twice as abundant as gold – and found in ores such as bismuthinite and bismite. It’s mined in countries such as China (the world’s largest producer), Vietnam, Mexico, and Japan. It’s also often a by-product of the extraction of other metals such as lead, copper, tin, molybdenum and tungsten.

Bismuth is sold in ingots in the same way that many other metals are such as tin, lead, antimony, and indium. If you are in the market for a couple of bismuth ingots you’ll most likely have to go directly to one of the big suppliers, such as Frances’ Meta Concept. Here you can buy ingots of many different types of metals – they’re also tin sheet metal suppliers & produce tin ingots, pure metal ingots and alloys in the form of various sized ingots and billets. The billets are vacuum cast in just one step and therefore offer the best quality price ratio on the market.